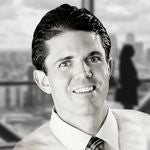 Ryan Harrigan knows New Mexico. He was raised in Albuquerque, attended historic Highland High School, and was named the Metro Athlete of the Year in 1994. His basketball skills took him to Tennessee and the University of the South (SWANY), where he played for four years becoming SWANY's all-time leading scorer. But he was much more than an athlete. His academic achievements at SWANY earned him admission to one of the premier law schools in the country, New York University School of Law. Upon graduation from NYU Law, he moved to San Diego, California to practice law with the international firm of Latham & Watkins, LLP. He remained with Latham & Watkins, LLP, for eight years with the Health Care practice group. Developing a unique skill set of health care compliance, medical professional licensing, staff credentialing, regulatory compliance, National Practitioner Data Bank ,and health care related litigation, Ryan could practice law anywhere.

And he chose New Mexico and SaucedoChavez, P.C. With his wife Heather and their three young boys, Ryan returned to his home city with the promise to give back—and he has. Although he continues to represent medical professionals and health care facilities in an array of matters, Ryan also represents injured New Mexicans. Being bilingual and growing up in a historic area of the Albuquerque, he understands his clients and their problems. His compassion and legal skills have produced impressive results. Just within the past few years, Ryan has obtained millions in recovery for his clients. Most notably, he recovered more than 1.8 million for the estate of a motorcycle tire failure victim. He has also recovered significant settlements for a nursing home victim, a trucking victim, and victims of drunk drivers.