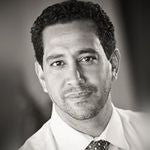 Chris is an accomplished litigator. He's taken cases to trial throughout New Mexico in both state and federal court. And with great results!

Chris grew up in the Mesilla Valley, just south of Las Cruces, New Mexico and he graduated from Gadsden High School. Growing up, his parents attended New Mexico State University, which showed Chris the possibility of social mobility. So it was natural that he also attended NMSU, as did his two siblings. After earning a finance degree, Chris moved to Albuquerque to attend the University of New Mexico, School of Law. It was on his first day of law school that he met his first attorney.

Chris's career started working with vehicle product liability cases and wrongful death matters. He then moved to the highly reputable firm of Browning & Peifer, P.A., in which he expanded his litigation experience to complex commercial and employment litigation. His next move was as a junior partner with Silva, Saucedo & Gonzales, P.C. where he continued his representation of clients in difficult and complex matters.

But he always wanted to chart his own course. In 2011, Chris and Mo Chavez started SaucedoChavez, P.C.

In just the past five years, he has successfully argued before the Tenth Circuit, before the New Mexico Supreme Court, tried cases in federal court, tried cases in three judicial districts in New Mexico, several arbitrations, and many administrative hearings. He's received defense verdicts for business clients and millions in recovery for everyday people.

Chris is an AV-rated attorney by Martindale-Hubbell and has been recognized by Super Lawyers® for eleven consecutive years.

But his true passion is his community and his family. Chris currently serves on the Board of Regents for NMSU, his alma mater. He also served on the inaugural Citizens Redistricting Committee for New Mexico. For 8 years he served as President of the Board of the National Hispanic Cultural Center. He is the proud father of two and husband of 23 years to his wife, Leslie.